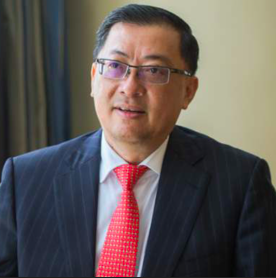 Mr Wong Heang Fine joined Surbana Jurong in 2015 and is Group CEO of the Company. He is a Board Director of SMEC and AETOS and Chairman of Sino-Sun. He is also a Board Member of the Building and Construction Authority, an agency under Singapore’s Ministry of National Development that regulates Singapore’s building and construction industry. Mr Wong is an Adjunct Professor in the School of Mechanical & Aerospace Engineering at Singapore’s Nanyang Technological University.

Mr Wong held many key leadership positions across a number of industries over the last 35 years. Most recently, he was the CEO of CapitaLand Residential Singapore Limited and CapitaLand GCC Holdings, and also the Country CEO in charge of developing CapitaLand’s business in the Gulf Cooperation Council region. Mr Wong was also CEO of Capitala, a joint venture company between CapitaLand Singapore and Mubadala Development Company in United Arab Emirates.

Mr Wong joined Cathay Organisation Pte Ltd in 1998 as its Deputy President. He helped realise the company’s ambition of going public via a reverse takeover strategy through IMM Multi-Enterprise which was listed on SESDAQ. A year later, he was appointed President & CEO of Cathay Organisation Holdings.

From 1996 to 1998, Mr Wong was Director (Infrastructure), L&M Group Investments Ltd. During his tenure, he restructured the company by spearheading diversification into the infrastructure and property sectors.

Between 1991 and 1996, while in Singapore Technologies Industrial Corporation, Mr Wong pioneered the infrastructure development of the industrial estate and a 24,000-hectare international resort belt on Bintan Island, Indonesia. He was also instrumental in developing and managing the Bintan Lagoon Resort.

Mr Wong was the President of the Real Estate Developers’ Association of Singapore from 2011 to 2012. He also served as a Senior Industry Officer with the Economic Development Board where his responsibilities included the promotion and development of investments into Singapore. He graduated with a First Class Honours in B.Sc (Mechanical Engineering) from the University of Leeds, England and a M.Sc (Engineering Production and Management) from the University of Birmingham, England.

Mr Wong has been a member of WorldGBC’s Corporate Advisory Board since May 2019.

Our global talent pool of over 16,000 employees from more than 120 offices in over 40 countries worldwide, include architects, designers, planners, engineers and other specialists, who are driven by progressive thinking and creative ideas to help shape a better future.

Our technical experts deliver best-in-class solutions that cover the entire project life cycle from planning and design, through to delivery and management, and even decommissioning and closure. We provide a full suite of consultancy services across a diverse range of sectors such as aviation, healthcare, hospitality, transport, water and environment, energy and resources.

With a wealth of experience, we have built more than a million homes in Singapore, crafted master plans for more than 30 countries and developed over 100 industrial parks globally, building homes and designing cities that are socially, economically and environmentally sustainable, empowering communities to thrive.