In this series of articles, WorldGBC’s Director of the Europe Regional Network, Stephen Richardson, speaks to the 8 pilot cities involved in BUILD UPON2 – the world’s largest collaborative project on building renovation.

Each city is working with its national Green Building Council in the development and testing of a ground-breaking new framework. This framework features a set of indicators that allow municipalities to measure and quantify the different impacts and benefits of building renovation. By capturing this crucial local data, cities can identify renovation best practice, which can then be scaled up and inform national policy decisions.

This municipal approach is key to delivering the European Commission’s Renovation Wave, a programme that aims to renovate 35 million of the bloc’s buildings by 2030, as well as achieving the EU Green Deal’s vision of a climate-neutral Europe by 2050.

For this first article on the city of Padova, WorldGBC spoke to Giovanni Vicentini, Sustainable Technical Officer at the Municipality of Padova and Valentina Marino, BUILD UPON2 Project Manager at GBC Italia.

Based on these conversations, this blog will cover some of the challenges and triumphs of renovation work on the municipal scale, including:

Located in the northern Italian region of Veneto, Padova (or Padua as it is widely known to English speakers) is a medium-sized city of around 200,000 inhabitants.

The city has a rich history, and according to a tradition dating back to Virgil’s epic The Aeneid, Padova was founded by the Trojan warrior Antenor in the 12th century BC. Though there are few remnants from its Roman period, Padova’s mediaeval city centre is well preserved, with many ancient and protected buildings that date from the 14th and 15th centuries.

Where renovation is concerned, the city’s medieval buildings are a particular challenge, says Giovanni Vicentini, who works in a team of around 50 in the municipality’s environment and energy department. “You cannot intervene in these types of buildings without approval from the heritage agency, which operates at the national level,” he explains. It is often impossible to renovate the building envelope or add solar panels to these structures for this reason.

He adds that many of the city’s poorer citizens, as well as students of the University of Padova, are tenants in these older buildings. This raises additional issues because the buildings are often owned by wealthier landlords who live elsewhere and tend to be unwilling to invest in renovation, particularly if they face missing out on rent payments if tenants have to be moved out temporarily.

Padova’s historic city centre is home to many buildings from the 15th and 14th centuries and earlier.

However, outside this central time capsule, the cityscape of Padova is markedly different. Much of the city suffered from Allied bombing raids during the Second World War, with over 2,500 homes destroyed or badly damaged. As was the case with many European cities after the war, when it came to rebuilding, the priority for the local authorities was speed and quantity of homes produced, rather than quality. The result was that in the 1960s and 70s a large number of condominium flats were built in Padova, many of which remain extremely low performing in energy terms.

These condominiums are one of two types of building where the municipality is measuring the benefits of renovation work using the BUILD UPON2 (BU2) framework. The other has been single family buildings, where renovation has been altogether less challenging than in condominiums, explains Vicentini. “It’s easier to intervene in those buildings because people living there have the money to refurbish them,” he says. “And normally you have to speak with only one family, not many families, whereas in condominiums you have a condominium assembly, which has to decide for the intervention.”

The starting point for implementing the BU2 framework was monitoring how these buildings can benefit from lower energy bills as a result of energy efficiency renovation, by measuring this metric before and after intervention. The focus of the framework indicators also monitors the internal comfort that tenants perceive in their homes after renovation work compared to before, as well as factors such as water consumption.

Vicentini says that Padova is trialling country-specific indicators in the BU2 framework related to climate change adaptation and mitigation. Temperatures can hit over 38°C in the summer months, though this can feel considerably warmer to inhabitants in the city due to the urban heat island effect, where concentrations of manmade structures cause a local increase in temperatures.

“There are people who now have to cool their buildings who didn’t before [using air conditioning systems], and as a result, we have a significantly increased electricity demand in the summer period,” says Vicentini. “We are trying to understand if, for example, installing insulation or solar shading on a building, or installing solar panels on the rooftops to provide energy for the cooling systems – if these measures can solve the problem of the urban heat island, and the increase in energy demand.” 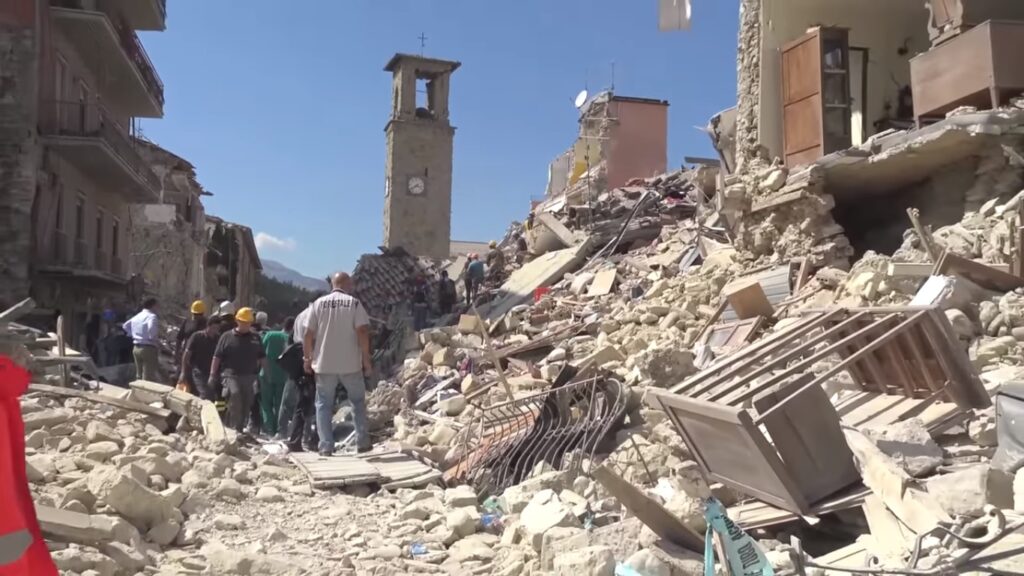 Wreckage in Amatrice from the August 2016 earthquake

“We cannot think about renovating a building without taking into account problems other than energy,” adds Valentina Marino. Flooding is a problem in Italy that, along with urban heat islands, has been exacerbated by climate change. In addition to this, the fundamental geographical position of the country leaves it vulnerable to seismic activity – for example an earthquake in Central Italy in August 2016 measured up to 6.5 on the Richter scale and caused the deaths of 299 people.

Sadly, tragic events like this are not uncommon, occurring on two other occasions in the last 12 years. The 2012 earthquake in the Emilia Romagna Region measured up to 5.9 on the Richter scale, displacing 45,000 people and killing 28, while the 2009 earthquake at L’Aquila in the Abruzzo region measured up to 5.8, displacing 80,000 and killing over 300 people. As a result, Padova is trialing indicators as part of its work on BU2 that measure the extent to which renovation work can make buildings more resilient to natural disasters like floods and earthquakes.

Marino says that the inclusion of these factors increases the likelihood that renovation work will go ahead, and represents a win-win for citizens and those funding the work: “You are investing in a building that in the future, in the case of an earthquake, will be safer. Otherwise, you are installing some layers of insulation into a building that will fall down at the first problem. So you are wasting your money.”

A priority for the European Commission’s Renovation Wave action plan has been targeting the problem of energy poverty, with the Commission estimating that at present as many as 34 million Europeans cannot afford to keep their homes heated. Investment in renovation can address this gap, making homes more energy efficient and reducing gas and electricity bills as a result. The reduction of energy poverty is another indicator of the BU2 framework which Padova has been measuring, which can be a difficult process, explains Vicentini.

A fundamental challenge in the first place has been the question of how to define energy poverty on a local level. To measure renovation progress and obtain the right information for the BU2 indicators, Vicentini says the municipality has combined census data on family income, with GIS data. These maps break down different factors by area, such as typology and construction period of buildings, and natural gas expenditure per person. See below for an example, presented by Vicentini during the BU2 webinar How to Make the Renovation Wave a Success.

The combination of these phenomena, where low-income households have disproportionately high energy costs, tells the municipality where energy poverty is an issue, and also where renovation has helped to alleviate the problem. The action taken by the municipality to help those living in energy poverty takes several forms, including the provision of money for energy bills, but also advice on measures and funding available for renovation work.

Valentina Marino finds it encouraging that energy poverty is beginning to be considered a priority for many municipalities. She says: “The problem of energy poverty summarises the main goal of all the political activity of a city: to provide a better life for its citizens.” Marino explains that the problem is particularly resonant for local governments because it ties together politics, energy efficiency and of course the social and economic concerns of the people it affects.

Giovanni Vicentini says data collected using the BU2 framework has been important in calculating the degree of success of Padova’s existing energy efficiency policies. The project has also linked well with the work done on some of the municipality’s other initiatives. Indeed, the city’s track record of involvement in separate European-wide schemes was a key factor that led to its selection by GBC Italia as a pilot city.

An example of these European projects has been PadovaFIT Expanded, which, like BU2, is a renovation initiative funded by the EU’s Horizon 2020 initiative. As part of this scheme, Padova is trialling a one-stop shop which aims to encourage investment in energy efficiency by bringing together all the players together in the renovation process – from homeowners to technical experts, to local authorities. The initiative is an example of the kinds of stakeholder platforms which WorldGBC has called for as key to making the Renovation Wave a success.

Vicentini adds that the fact that the BU2 framework came from an established body like GBC Italia, which is outside the sphere of the municipality, made it easier to collaborate with the other departments that were providing the data for the different indicators. “They are more inclined to obtain the data for these indicators if the framework comes from a different institutional level. So the framework helps us to be more respected by the other departments that we asked to fill in these indicators but are not obliged to do so,” he explains.

Following a successful trial period, the BU2 framework is to be integrated into Padova’s Sustainable Energy and Climate Action Plan (SECAP), which the municipality is in the advanced stages of drafting. Part of this plan, which covers the next decade towards 2030, relates to the city’s building stock, for which Vicentini says the government will implement 20 different policies. The BU2 framework indicators will form the core of the city’s methodology for monitoring progress with these measures over the next ten years.

For GBC Italia, the next big milestone in the BU2 project will be the final version of the framework, produced in collaboration with Climate Alliance and seven other GBCs in Croatia, Hungary, Ireland, Poland, Spain, Turkey and the UK. Following this, the framework will be presented at a workshop with stakeholders in Padova, who will offer their feedback on the latest set of framework indicators.

In the months ahead, the Italian cities of Brescia, Pesaro and Rome will join the second testing phase of the BU2 framework, which will build on the impressive work done already in Padova. Valentina Marino is particularly excited by cross-sector progress made in three recent workshops in Brescia organised by the Municipality together with GBC Italia – one each for the financial sector, designers and builders, and investors and the property sector: “We spoke about what barriers exist for renovation work in the area and what help they expect from the municipality. Now we can apply these three perspectives to the problem of implementing the renovation wave in Brescia!”

Stephen Richardson is Director of Europe at the WorldGBC.